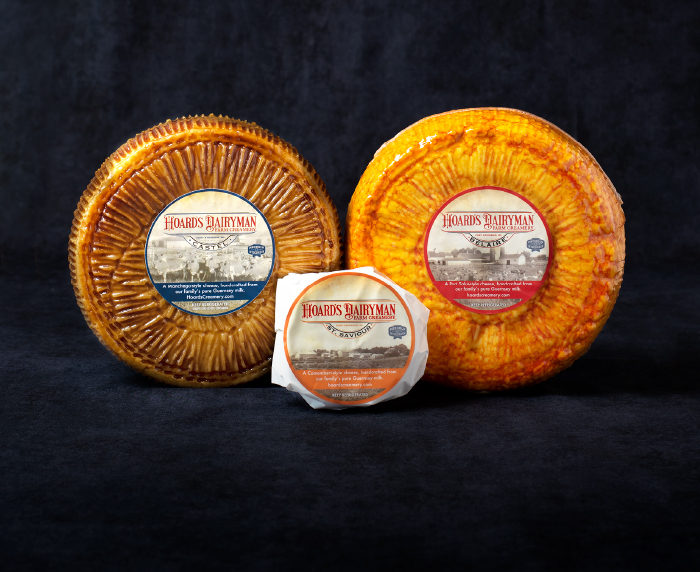 A Collaboration for the Ages: Hoard's Dairyman Farm Creamery Partners with CDR and Cheesemakers to Create Unique Cheeses

What do you get when you take the knowledge and skill of Wisconsin cheesemakers and the Center for Dairy Research (CDR) and combine it with high-quality Guernsey milk from Hoard’s Dairyman Farm? The answer appears to be some really great, unique cheese.

In the Fall of 2018, Hoard’s Dairyman Farm Creamery released Belaire, a Port Salut-style cheese. Belaire has been well received, earning a top 10 finish in the semi-soft cheese category at the 2019 United State Championship Cheese Contest and winning a gold medal this summer at the Green County Fair.

Sandy Speich, Director of Hoard’s Dairyman Farm Creamery, said they wanted to make cheeses that showcase the qualities of the farm’s Guernsey milk.“It’s higher in fat, higher in protein so you get a much better yield,” Speich said. “The cheese is very creamy and buttery from all the fat and it’s also high in beta carotene, so it gives you a nice golden-yellow color.”

The Hoard’s Dairyman Farm Creamery website describes the Belaire as having a pale-yellow interior highlighted with a distinctive bright orange rind. Its high-fat content gives the cheese a creamy, subtle flavor and soft texture. It’s described as being similar to Muenster but with a bolder, creamier taste.

The St. Saviour, a Camembert-style cheese, has a rich, buttery flavor from a soft, creamy core inside a bloomy white rind. The Hoard’s Dairyman Farm Creamery website recommends that both the core and the rind be enjoyed together for the “true St. Saviour experience.”

The Castel, a Manchego-style cheese, has a golden interior with a distinctive brown rind. It’s a slightly sweet cheese with notes similar to those found in aged Gouda and Parmesan. It has a drier body that makes it easy to grate but it also stands up on its own as a flavorful table cheese. Like the other cheeses, it also has the rich, creamery flavor associated with high-fat Guernsey milk.

The names of the cheeses pay homage to the Isle of Guernsey, an island off the Northern coast of France, which is the home of the Guernsey cow. Belaire is named after the naval captain who brought the first Guernsey cattle to America. Castel and St. Saviour are parishes on the Isle of Guernsey. 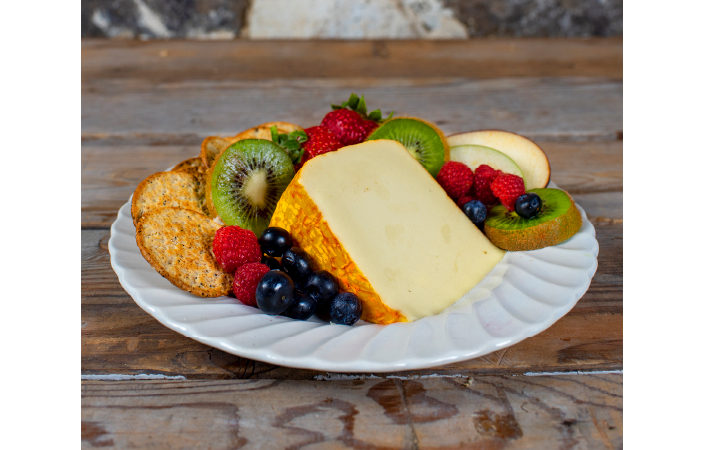 As many in the dairy industry know, Hoard’s Dairyman Farm is steeped in history. The lineage of some of the Guernsey cows on the farm can be traced back to W.D. Hoard’s original herd that was established in 1899. The herd is the longest continually registered Guernsey herd in North America. According to the Hoard’s Dairyman website, the herd ranks number 1 in the nation for milk, fat and protein in the category of 100 or more cows. The American Guernsey Association has also recognized Hoard’s Dairyman Farm as the Top Commercial Herd.

With all that quality milk available, this isn’t the first time Hoard’s Dairyman has made cheese. Hoard’s Dairyman magazine used to make cheese to send out at the holidays as a special gift for the magazine’s advertisers. The cheeses were well received, and people asked where they could buy them. Hoard’s Dairyman approached the cheese factory where they made their seasonal cheeses but the factory was in the process of shutting down. That was about 30 years ago. Speich said the idea of making cheese was always in the back of people’s mind at Hoard’s Dairyman. Then, several years ago, they began working with CDR .

“We looked at their milk supply and identified what was special about their Guernsey milk and we used that to inspire our choice of cheese varieties that would really showcase that milk,” said Gina Mode, CDR Assistant Coordinator for Cheese Industry and Applications Group.

As mentioned earlier, Guernsey milk has higher fat and protein content than other bovine milks. It also has a unique golden color. “Guernseys do not break down the beta carotene that’s in the feed,” Mode said. “So, you get that beautiful golden color in the milk and cheese. In fact, Guernsey milk used to be prized for making butter.”

CDR’s TURBO program was also able to assist with the project. Hoard’s Dairyman Farm Creamery applied for and received a $20,000 reimbursement grant to purchase cheese forms and other cheesemaking equipment. The grant was awarded through a $200,000 reimbursable grant program administered jointly by the CDR TURBO program and the Wisconsin Economic Development Corporation (WEDC).

Initially, Hoard’s Dairyman Farm Creamery had a goal of building its own cheese factory, but those plans have been set aside as they’ve had success partnering with exceptional Wisconsin cheesemakers. Ben and Bruce Workman at Edelweiss Creamery make the Belaire and Castel cheeses and Jon Metzig at Union Star/Willow Creek Creamery makes the St. Saviour. Bruce Workman and Jon Metzig are Wisconsin Master Cheesemakers.

Metzig, who has just completed the first make of the St. Saviour, said the process went well and added that the quality of the milk is a highlight.

“I can tell that it's good milk. They do a good job at the [Hoard’s] farm,” he said, adding that quality milk is essential for cheesemaking. “Your cheese can’t be any better than the starting product, which is the milk. You can’t make good cheese out of bad milk; it’s not possible.”

These unique cheeses require a high level of skill to produce. Mode pointed out that Ben Workman, who has taken the lead in producing the Castel, makes the cheese in a traditional copper vat. “It’s a real pleasure to watch him make Castel,” Mode said. “It’s very striking visually – you have the gorgeous golden Guernsey milk in that big copper vat. It’s really great to see that kind of cheesemaking today.”

“That’s always kind of a challenge,” Ben Workman said of making the cheese in a copper kettle. “We don’t make a lot of other things in it other than Swiss. We had to be a little more innovative than we’re used to when we transferred it from the copper kettle to the forms.”

“Partnering with the Workman’s has been so easy,” Speich said. “They know what they’re doing. They’re always very helpful, and they really have been guiding me through this whole thing.” Speich added that Jon Metzig has also been great to work with although he’s “a little more quiet than the Workmans,” she said with a laugh. 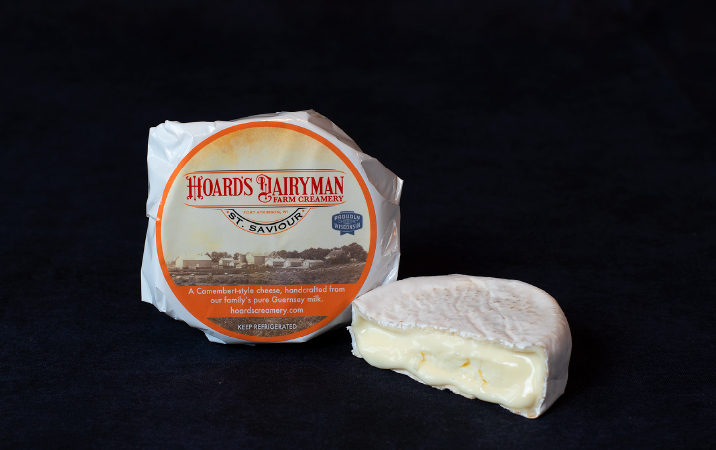 Throughout the process Hoard’s Dairyman Farm Creamery, CDR, and the cheesemakers have been working together to produce these unique cheeses. The resulting cheeses really are fruits of this collaboration. For example, while CDR was developing the recipe for Belaire, Edelweiss Creamery was developing their own recipe for Port Salut. It was a happy coincidence and the final recipe that is being used today combines elements of both. “What’s currently being made is everything brought together and it’s just a really beautiful cheese,” Mode said.

“Since we’ve been making it, it has quickly become one of my favorite cheeses,” Ben Workman said of the Belaire cheese. “I couldn’t be happier with it. It has a nice consistent body and flavor.”

Everyone involved in the project admits that it’s been a long time in the making. Various challenges along the way needed to be addressed like the logistics of getting the milk from the Hoard’s Dairyman Farm to the partner cheese plants. In addition, the Castel requires quite a bit of time to age. The St. Saviour (Camembert) also posed some challenges. CDR was searching for a cheesemaker who could add the white mold directly to the milk, rather than spraying it on the rind later in the process. In the end, Hoard’s Dairyman Farm Creamery, CDR and Wisconsin cheesemakers have been able to find solutions to these challenges and it’s a good thing because the final result is some unique cheese.

This project is also special because it draws on some of the resources and expertise that make Wisconsin an extraordinary state when it comes to cheesemaking. First, there’s the milk from Hoard’s Dairyman Farm’s historic Guernsey herd. Second, the project showcases the expertise and creativity of Wisconsin Master Cheesemakers and CDR staff. And third, the project benefited from the CDR TURBO Program. The project is also showcasing the state's next generation of cheesemakers.

“When you start talking about the history of Hoard's and how W.D. Hoard started out writing articles promoting the dairy industry and then seeing what it’s grown into today; it’s kind of amazing,” Metzig said. “It’s pretty special making cheese with milk from Hoard’s, considering everything they’ve done for the dairy industry over the years.”

For more information on Hoard’s Dairyman Farm Creamery cheeses (including where you can purchase the cheeses), visit: www.hoardscreamery.com.